A purposive sample of relevant representatives will be chosen to be followed systematically – for the entire duration of the course, by small groups of students and young researchers – in their discourse about Europe on the social media: i.e. Twitter, the popular micro-blogging site with millions of users, and Facebook, the most used social networking service today.

The attention of participants to the tutorial class will be focused on a set of crucial issues about EU politics individuated as case studies. Students, properly equipped both methodologically and technically, will collect Twitter feeds and Facebook posts, identify social groups and analyze specific actors on their discursive interactions in the multilevel political arena (Francesco Olmastroni & Sabrina Cavatorto). 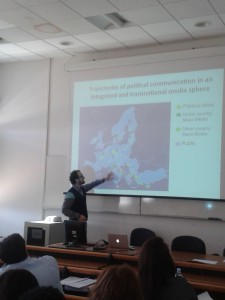 Check the Materials/Tools section to be updated